Significant views will be generated through VME, SBS, and Viva Live TV for Broadcast, Livestream, and/or OTT distribution of the Festival 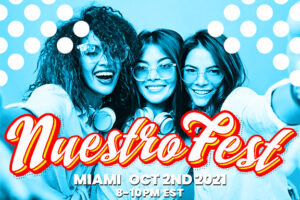 Atlantino and Brilla Media today announced they will produce NuestroFest, a National Hispanic Heritage Month-themed virtual festival that will be hosted live from Miami October 2nd from 8-10 pm EST, on national broadcast TV and through various streamers and online platforms.

NuestroFest will also include the culinary and mixology segments from Miami’s best restaurants and clubs as well as a segment on hot new fashion trends for 2022.

Award-winning director Efrain Gonzalez will produce a series of historic music segments about how Miami has given the world many grooves ranging from the Miami Sound Machine and Marc Anthony to Willy Chirino and the Bee Gees.

In addition, NuestroFest is collaborating with the Rhythm Foundation to broadcast the Virtual Festival Live on the 25’ Stage Screen at the North Beach Bandshell on 73rd and Collins Avenue on Miami Beach from 8-10 pm free for all music lovers. A live music concert will be hosted on the stage from 10 to 11 p.m. as part of the Hispanic Heritage Month festivities.

Atlantino and Brilla Media have already produced five of the pandemic’s most prominent U.S. Hispanic virtual festivals, including the recent Cinco de Mayo LA Virtual Festival, Altísimo Live, which was a PRWeek 2021 finalist for the Best Multicultural Marketing Campaign of the Year, the 116th Street Fest and last year’s Calle Ocho Live.

“Miami is our hometown and a major base for many Latin American nations who consider it an extension of the region so this national show is extra special for us,” said Brilla Media CEO Manny Ruiz, who is co-executive producing NuestroFest with Atlantino’s Ralph Paniagua.

About Atlantino LLC
Over the past 35 years, Ralph and Joseph Paniagua have built Atlantino, a Minority owned company, into a powerhouse sponsorship and activations organization for Latino sports, entertainment, experiential, and digital. Through Atlantino, they have spearheaded Fortune 100 brand activations with Major League Baseball programs, the Roberto Clemente Brand, and more recently Golden Boy. In 2020, with the Covid-19 pandemic canceling many major Latino events, Atlantinopivoted to co-produce the 116 Street Festival, Calle Ocho Festival, and the Dominican Days at the Ballpark at 18 MLB stadiums reaching millions of viewers. And through 2022, Atlantino will produce a series of Virtual content promoting the Baseball Icon Roberto Clemente.