Once México begins a stage of expansion and digitalization, naming a new General Manager for its Mexican channel and for its international channel, which serves the U.S. Hispanic audience 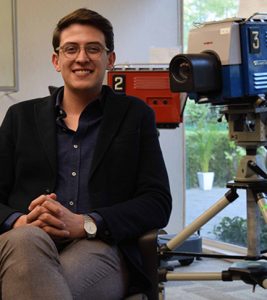 THEMA America, a Canal+ group, company, has announced new leadership for its Once México cultural channel and for its U.S. international channel, which serves the Spanish speaking market in the U.S. It has appointed Carlos Brito Lavalle as its new General Manager. The first non-profit channel in Mexico now enters a new era in 2021, determined to continue promoting its expansion and digital innovation.

“Today I see a strengthened Once México, with a growing and receptive audience for programs that are increasingly pluralistic and adapted to our changing reality,” said Brito Lavalle, the channel’s General Manager, adding that “The transformation to a more prosperous and inclusive Mexico has its foundations in education, and Once is committed to continue contributing to this important task.”

Previously, Brito Lavalle served as Coordinator of Operations, and as Coordinator of the “Aprende en Casa» (Learn at Home) I and II program, and as Head of Once México’s Acquisitions Division. The young director is a native of the State of Veracruz, Mexico and has studied Economics and International Relations at the university level. He joined Once México in 2019.Among his strategies for 2021 are continuing with the channel’s distance education project, which he helped successfully promote and implement in the wake of the Covid-19 pandemic. In addition, he will focus on the channel’s mission of providing a public education service. He will also prioritize customizing the channel’s content distribution to adjust it to the viewing demands of a loyal but diverse audience from different social levels.

In regard to the international signal, Once México’s new leadership also plans to continue promoting its growth in the digital area. In keeping with the channel’s global vision, it will implement new multiplatform communication strategies, to promote communication with existing audiences while attracting new ones. In this regard, Brito Lavalle stated, “We will intensify our efforts to turn Once México into a multiplatform that offers inclusive cultural and educational content that will also attract people who generally don’t watch TV.”

In this context, Once México’s new management seeks to position the channel outside of Mexico as a reference point of Mexican culture for all Spanish-speaking families in the United States.

Once México’s programming stands out for its high-quality educational and cultural content and its high social values, which highlight Mexico’s great cultural heritage, especially its traditions, gastronomy, natural beauty, diversity, and pluralism.

Thema America represents and distributes Once México’s international signal to the Hispanic market in the U.S. It is broadcast by major operators such as Xfinity, DIRECTV, AT&T U-Verse, Spectrum, and FiOS, among others. It is also available on the Sling and DIRECTV Now OTT services. The channel currently reaches an audience of more than 2.5 million Spanish-speaking viewers in the U.S.