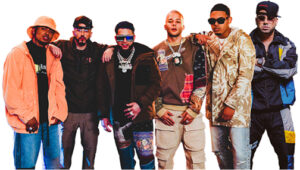 Nio Garcia and Casper Mágico are more than ready to take over, once again, all digital platforms and radio all over the world with “Travesuras” remix alongside superstars Wisin & Yandel, Ozuna and Myke Towers. The song is being released under the label Flow La Movie, distributed digitally by GLAD Empire, LLC and on the radio by Elite Media Marketing (EMM).
The remix comes after its first version, recorded by Nio and Casper, which conquered Billboard charts reaching the #1 on the Latin Airplay, Tropical Airplay and Latin Rhythm Airplay charts. Additionally, the duo ranked number one on the Latin Airplay Top Writers chart and # 15 on Hot Latin Songs.
“Travesuras” remix is ​​now available on your favorite digital platform. Click here to listen to the song while the video can be seen on the Flow La Movie YouTube platform. The new version is characterized by highlighting the musical personality of Ozuna, Wisin, Yandel and Myke Towers and, for sure, will conquer the summer of 2021.
“Travesuras”, produced by Xound & Goldi, rhythmically contains the base sound of “Noche de Travesuras” which is the original song that was released in 2005, which fuses the classic reggaeton beat with the unrivaled sound of a bachata guitar.