MY GRITO present THE PARANOIAS 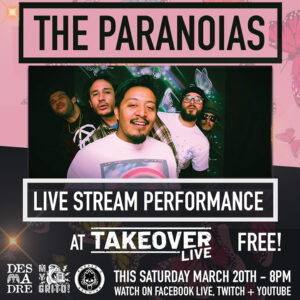 Self-described as ‘Your Ladies Favorite Band’, The Paranoias have been tearing up the West Coast for a few years now mixing Latin ska fusion, R&B, reggae, soul, jazz, punk and hints of electronic proving they’re one of the most innovative bands in the LA scene right now.

This Saturday March 20th, the band will take the stage virtually for a FREE, full band, multi-camera live stream from Takeover Live Studios. The set will feature songs from their catalog including new songs from their latest split ’Nightmare / Hope To See You Next Year’ out now on all streaming platforms.

Watch the Live Stream for Free starting at 8pm PDT this Saturday on Facebook Live, Twitch and on Youtube. (Link below). Presented in part by Border X Brewing and Desmadre Tequila. 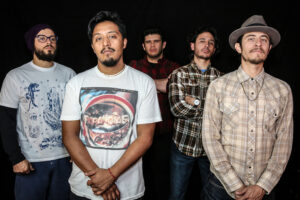 The Paranoias have quickly become one of the top bands in the L.A. ska/punk scene the last few years by virtue of their live performances at the annual SkaWars festival and performances at ska events/concerts around the city, including the Levitt Pavilion at McArthur Park and even sharing the stage with Celso Piña at The Troubadour and Inspector at The Union. Selling out shows across the LA areas as well as Orange County and Inland Empire, the band’s latest full length ‘Misperos’ is a healthy dose of the multi-influence range that the band’s committed fanbase has grown to love. ‘Misperos’ is out now on all streaming platforms and available on 12” vinyl at http://www.theparanoias.com.