ALONGSIDE CHIMBALA  AND ZION & LENNOX. 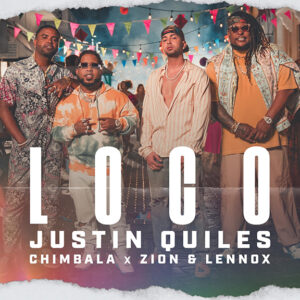 One of the Latin music genre’s leading and most versatile artists and songwriter, Justin Quiles, releases his latest hit song “LOCO.” The Puerto Rican three-time Latin GRAMMY® nominee joins forces with the legendary duo Zion & Lennox as well as Dominican Urban rapper Chimbala to bring the infectious global summer anthem to life. The song and video will be available to stream on all digital platforms today.

Quiles once again proves that there is nothing he can’t do musically with his newest song. With “LOCO,” the singer-songwriter further proves that he has the ability to continue to captivate audiences with music that is guaranteed to be a global and critical success. The song starts off with the melodic and upbeat strings of a guitar before jumping into soca-inspired beats that encapsulate the sounds of the Caribbean Islands. Quiles’ innate lyrical ability is on full display as he serenades his leading lady letting her know why she is the woman that captured his heart. His flow, tonality, and muscialty are perfectly matched with that of Dominican Urban rapper Chimbala and the incredible duo Zion & Lennox.

The video, which was filmed in the Dominican Republic, was directed and produced by Rodrigo Films. The official video for “LOCO” proves to be the perfect counterpart for the song as it flawlessly captures the catchy beats and rhythms laid by Quiles solidifying it as the summer’s incomparable anthem. The video portrays each of the artists expertly delivering their verses while in playful and colorful high fashions. Throughout the video, the sights and sounds of the Dominican Republic are in full force adding to the playfulness and vibes of the song.

In the past few months, Justin has celebrated the overall success of his hit song “Ponte Pa Mi” which accrued over 51 million views on YouTube, charted in the Top 200 Global list on Spotify with more than 176 million combined streams, and was certified Platinum in the US, Argentina, and Chile, certified Gold in Spain and Mexico, and 2x Platinum in Peru. Earlier this year Quiles released his latest single “Como Si Nah” with fellow Latin music superstars Arcangel, Kevvo, and Dalex. The song, which was produced by the legendary Dimelo Flow, has garnered over 15.8 million views on YouTube and 10.3 million streams on Spotify. Soon after, Quiles was featured in the prestigious Ocean Drive Magazine. The singer-songwriter took the spotlight with a stunning high fashion four-page spread making him the only Latin artist featured in the Men’s Issue for the month of April. In addition to his latest release, Quiles also recently participated in the all-new second season of HBO’s hit music series, A TINY AUDIENCE. Justin is in the final stages of his third-studio album which is slated to release later this year.