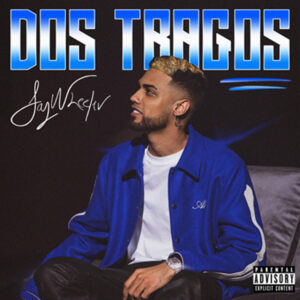 Fresh off his Premios Juventud win in the “Nueva Generación Masculina” (New Male Generation) category, promising Latin music star, Jay Wheeler released his brand new single and music video “Dos Tragos.”
“Dos Tragos” is his third solo single of the year after “Viendo El Techo” (19 million views) and his Valentine’s Day ballad “Amor de Febrero” (18 million views).
With “Dos Tragos,” Jay Wheeler brings back a melodic reggaetón that showcases his vocal range as well as his ability to create catchy hooks that will make people dance as they immerse themselves in the story of a guy waiting for the right moment to make his move before he loses his chance.
“I want the night to end so I can end up with you // I know I’m hyped up but this life isn’t for the dead, is for the living // You say you have to leave but I don’t say goodbye // And I asked the DJ to play another song to dance it with you,” Jay Wheeler sings in Spanish, setting the tone for the rest of the song.
The music video, directed by Abez and produced by Dynamic Records and Flow Music, was shot in a private residence in Puerto Rico, as well as Intercosmic studios. We see Jay Wheeler go out for a fun night at the same place where his love interest is having a great time hanging out with her friends and letting herself enjoy, while he waits patiently and plays his cards right until he finally gets to dance with her and have an unforgettable night.
“I’m excited for people to listen to ‘Dos Tragos.’ There’s always a pressure to put new music out — and I love doing it! — but I wanted to make sure the song was perfect so everyone can enjoy it the way it’s meant to be enjoyed. I hope people sing it, grind to it, and maybe feel inspired to shoot their shot!” Jay Wheeler said.
This song comes after a successful night for Jay Wheeler at Premios Juventud, where not only was he nominated for the “Nueva Generación Masculina” award but won, continuing to position himself as one of the most sought after Latin artists of this generation. Throughout the show, he also performed his last single “Viendo El Techo,” captivating the live audience as well as those who watched the event from home.
Jay Wheeler became known after a video of him singing went viral in 2016. Thanks to his newfound fame, he decided to pursue a career in music, eventually signing with Dynamic Records in 2018. He went on to release two albums produced by famed DJ Nelson: Platónico (2019) and Platónicos (2020), which included the mega hit that really catapulted him to fame, “La Curiosidad” feat. Myke Towers (562 million views on YouTube).
After the most successful year of his career, he kicked off 2021 experimenting with different genres and sounds, continuing to rake in massive streaming numbers in the 9 and 10 digits, and proving he truly is “la voz favorita” (the favorite voice).