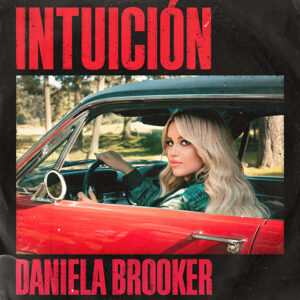 Following in the footsteps of the highly successful release of her musical trilogy earlier this year, Venezuelan and British singer-songwriter, Daniela Brooker, releases her debut EP Intuición. Intuición is available to stream on all digital platforms today.

“The reason I have named my EP, Intuición, is because it was during a time of a breakup, and I wrote with the intuition of what would happen to me in the future. So, I wanted to call it that because it reflects a lot of the feelings behind each song. I wrote the EP over the course of 10 months and on many different occasions. Some songs we did when I was in Miami, and some were created in London, so this influenced the songs with different sounds. Na’vi, who is a Colombian producer in Miami, is incredible in his style and is completely different from Kiris that is here in England, and I find that special in this EP. For the first time I am combining my sound from England and my Latin sound, which are my two cultures. Before I could never find a perfect combination to create songs with both — I’ve always made music 100% Spanish and the other in English, so I’m excited that this EP will be the beginning of a new chapter of mine,” expressed Daniela.

Daniela’s ability to tap into multiple genres gives her music unique touches and is appealing to her growing global audience. The combination of both her English and Latin roots come together on Intuición to create a distinct sound that is sultry, sensual, and spellbinding.

The EP is being released with a new focus single, “Miamera”, — a fusion of tropical house and mesmerizing guitar plucks — showcases Brooker’s warm, soulful vocals and her gift for distilling complex emotions over a wave of hypnotizing beats. “‘Miamera’ is a song that I wrote this year during quarantine in London. I connected with an incredible producer from England, Kiris Houston, who has created a lot of music that I admire. He also works a lot with the group, Disciples, and makes a lot of English music. He’s had an interest in Latin music and we have always wanted to work together, so this year gave us the opportunity to get into the studio and create the first song we have written together,” she says. “‘Miamera’ came very organically — we wrote and produced it all in the same day. This is a very sexy song about spending a night out on the beach in Miami. We wanted to make it different from the other songs because it’s super chill and the type of song you can listen to when you’re relaxing in your car, at your house, or on the beach. It’s a very visual song and I’m very happy that everyone can listen to it. It is the first song with a new style of music that I’m doing during the time that I have been staying in London. People here have very different styles in production and I think that there is something very cool about the combination of that style and Latin music, in addition to the lyrics being in Spanish.”

The animated video created by The Flips Studio casts seductive animations over a retro wave aesthetic that vividly portrays Daniela’s idea of a night out in Miami. Like the song, it transports you to another dimension and indulges you in a series of hypnotizing graphics that flow naturally with the song’s rhythm and tropical vibe.

Earlier this year, Daniela released a trilogy of songs featuring “Celos”, “Malas Lenguas”, and “Mala Intencion”, a single to which she added the indelible talent of Spanish DJ/producer Sak Noel for its official remix. These releases, written by Daniela in collaboration with Venezuelan composer, Jorge Luis Chacín, all appear on Intuición as well. About the trilogy Daniela expressed, “These three songs — ‘Celos,’ ‘Malas Lenguas,’ and ‘Mala Intención’ — are about a past relationship that taught me many things, both good and bad. I wanted to write these songs because, for me, it is incredibly important to write about things that have occurred in my life and have made me the woman I am today.”

Daniela definitely proves that she is an auspicious up and comer whose musical vibe, alluring voice and flair for introspective lyricism make her a bonafide star on the rise and one of the new and most promising bombshell artists in Latin music. Listen to Intuición now!