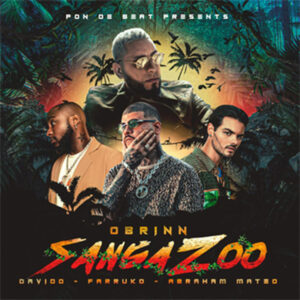 Spanish singer-songwriter Abraham Mateo, the Nigerian-American singer DaVido, Latin GRAMMY®-nominee and producer Obrinn and successful urban-superstar Farruko, join forces with a social-media fan base of more than 111 million followers, and 8.2 billion streams on YouTube for the release of “Sanga Zoo”. The audio and video are available now on all digital platforms.
“The Fantastic 4” give life to a new musical concept named Afro-Pop, exploring new sounds in the music industry. Abraham Mateo, DaVido, Obrinn and Farruko, are very unique and different from each other, but, together, they create an unprecedented “explosion” of talent and rhythms.
“Sanga Zoo” was designed to be danced, combining African music, Latin-urban rhythms, Pop, and Afrobeat. The single is a true-original creation, in which all of its interpreters participated as composers via Sony Music Latin.
“Sanga Zoo” premieres with its official music video, showcasing a fantasy environment, dominated by dance moves, rocky shores, and the undeniable African “vibe”. The audiovisual piece was produced by Cinema Giants and directed by the experienced filmmaker Mike Ho.
Stream “Sanga Zoo” today on your favorite digital platform.