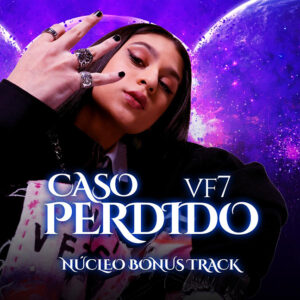 The young Puerto Rican singer who is sweeping her way into the urban genre: VF7, has achieved unprecedented success with the release of her album “Núcleo”. Today, the artist gives her fans a bonus track from that same album called «Caso perdido», and it is now available on all digital platforms.
VF7 has made a clear statement in the current Latin music industry, she is not limited by her age, and her amazing talent speaks for herself. The singer enjoys great success just 3 months after the release of her first album, with more than 15 million streams and more than 20 million views on YouTube.
From her album “Núcleo” there were many «loose» songs that she would have liked to include, and one of them was «Caso perdido». After VF7’s undoubted success, the idea of ​​gifting her fans with a bonus track felt just about right.
“Caso Perdido” is a wavy, romantic reggaeton with lyrics that can heal the most wounded heart. The song talks about the overcoming of a girl who leaves a relationship and decides to continue with her life because it is better to give «rest in peace to your kiss» than suffer for love.
The single was born from the composition of VF7 together with Joan Anthony, with the production of Mr. Naisgai, mixed and mastered by Nino, under the record label SORA and Co.
Enjoy «Caso perdido» today on your favorite digital platform.