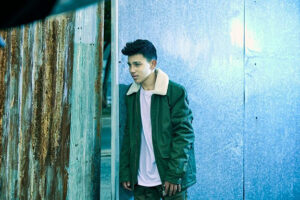 The young salsa prodigy Luis Vázquez presents today his brand-new single and music video “Me Tienes Mal.” The track was written by Damian Santiago with musical arrangements by Jay Lugo.
The song “Me Tienes Mal” tells the story of a young man who falls in love with a girl from his class but doesn’t know how to tell her. Meanwhile he’s imagining all possible scenarios in his head.
“It’s the girl who’s walking there // The one with the light blue jeans // She’s the one that’s been driving me crazy since we crossed paths in the tenth grade // It’s the girl who’s walking there // With her modern style // If she knew that her name fills my notebook,” is the catchy hook of this song in Spanish.
The music video, directed by Sentido Común, goes back and forth between the school and a stage. It shows the dichotomy of Luis being shy to ask a girl out, while on the stage he looks comfortable and secure. Eventually, that attitude translates into his romantic life, giving way to a happy ending in this love story.
“Me Tienes Mal” ​​is the second single from Vázquez’s album titled “Comienzos”. In that same record production we find “Tu Fan,” an urban-infused salsa that scored Luis his first number one on Billboard’s Tropical Airplay chart at the beginning of this past July. At 15 years old, this Puerto Rican becomes the youngest soloist to reach this spot since the chart began in October 1994.
Luis Vásquez began his artistic career at 5 years old as the lead singer of Los Bravitos de la Plena, a kids music group. Along with seven other children, they stood out for singing «plena» and defending the Puerto Rican folk genre. The group was founded by Luis’ father, who is also a musician.
After 9 years in the group, Luis split up to focus on his career as a soloist and salsa performer.