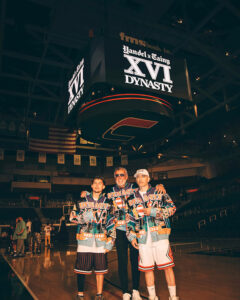 Multi-award winning Puerto Rican producer and artist, Tainy, and iconic musician and long-time colleague, Yandel, have partnered with one of the most coveted fashion designers, Jeff Hamilton, to create special edition jackets for their upcoming highly anticipated joint album “DYNASTY,” which releases on July 16. The superstars, who can be spotted wearing their custom jackets in the recently released music video for “Deja Vu,” sported the iconic custom fits at their Puerto Rico block party last week at Eco Sports Park where they gave an exclusive performance and which was a part of a historic 13 city stadium premiere event.

Renowned fashion designer Jeff Hamilton has become one of the most iconic and prolific names in the NBA having crafted jackets for legends such as Michael Jordan, Kobe Bryant and Lebron James. His custom leather jackets also permeated pop culture outside of the NBA and have been spotted on Madonna, Nelson Mandela, Muhammad Ali, Drake, The Weeknd, to name a few. Fitting seamlessly with the classic NBA theme of “Deja Vu” and the collaboration album, “DYNASTY,” Jeff Hamilton loaned his iconic creativity to craft one-of-a-kind jackets for the two global superstars using his infamous bright colors and oversized graphics.

“It has been a great honor to be able to work on jackets celebrating the ‘Dynasty’ of the spectacular careers of Tainy and Yandel. Legends in the Game!” said Jeff Hamilton.

Tainy and Yandel began working together 16 years ago when Yandel was beginning his global success as part of the award-winning duo Wisin & Yandel & Tainy who at the time was 16 had just entered the music business by producing a song the group was featured in. Now with multiple Latin GRAMMYs & countless multi-platinum records under their belts, they came together to create a project that reflects Yandel’s iconic voice and lyrics with Tainy’s groundbreaking production. With “DYNASTY,” the duo are looking to celebrate the growth and global takeover of Latin music through the eyes and experience of the iconic Reggaeton superstar and Billboard’s #1 Latin music producer for 86 weeks and counting. 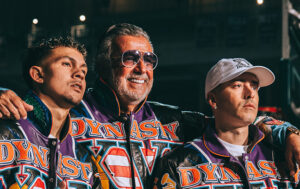 ABOUT TAINY
Leading a new wave of Latin music for over a decade, famed producer and artist Tainy, is the mastermind behind some of music’s most iconic hits. A three-time GRAMMY©️ nominee, three-time Latin GRAMMY©️ and multiple BMI Award Winner, Tainy has been churning out career-defining hits for countless artists as well as his own, including Daddy Yankee, Bad Bunny, J Balvin, Rosalia, Lauren Jauregui, Zion & Lennox, Anuel, Ozuna, Don Omar, Wisin & Yandel, Kali Uchis, Rauw Alejandro, Jhay Cortez and more. In 2019, Tainy made his artist debut and reached the top charts with hit singles including: “I Can’t Get Enough,” ”Adicto,” ”Callaita,” #1 Latin Pop and Airplay single “Agua” and the GRAMMY®️ nominated “Un Dia(One Day).” In 2021, Tainy continued pushing the culture forward on a global scale with his latest executive production, Selena Gomez’ first full Spanish language body of work «Revelacion,» «Sunbathe» alongside Miguel, and Bad Bunny and Jhay Cortez’ “Dakiti,” which went No. 1 globally. In addition, Tainy continues to break records as the only producer to sit at the #1 spot on the Billboard charts for a record 85 weeks. Plus, NEON16, which he co-founded with music executive Lex Borrero, was named Fast Company’s Most Innovative Music company of 2021. He recently announced his upcoming album with Yandel which is slated to release in summer 2021 and he is also working on his upcoming debut solo album.

ABOUT YANDEL
Yandel began his career in 1998.  He is a phenomenally successful Puerto Rican vocalist, songwriter, musician, record producer; and reggaetón artist.  He took a new turn as a soloist in 2014, touring the US. Yandel’s De Líder a Leyenda VIP Tour to sold-out houses in New York, Washington D.C., Los Angeles, Houston, Dallas, Chicago and Orlando and Latin America.  His solo album, released in November 2013, De Líder a Leyenda debuted at #1 on Billboard’s Top Latin Albums chart and #9 on the Top Rap Albums chart. It was certified Gold (Latin) by the RIAA (2014) and received a Latin Grammy nomination.   In October 2014 Yandel became the first artist of his genre to record a TV special for the prestigious network HBO Latino.  He also recorded a new track, “Marcando Territorio,” for Catch the Throne: The Mixtape Vol. 2, the mixtape soundtrack featuring multiple artists for HBO’s megahit series Game of Thrones. November 2015 marked the arrival of the highly anticipated production title Dangerous.  Dangerous climbed achieved a #1 on sales the week of its release. The same month, the singer/producer score another first, by becoming the first Latino artist to stream a live concert via Tidal and performing live at the boxing match produced by HBO Cotto vs. Canelo.  Some of his musical collaborations in general and Hispanic market include:  J-Lo, Akon, R. Kelly, 50 Cent, Ja Rule, Eve, Nelly Furtado, Gloria Estefan, Ricky Martin, Enrique Iglesias, Don Omar, Daddy Yankee, J Balvin, Chayanne, Gilberto Santa Rosa, Maluma, Ozuna, Bad Bunny, Becky G, Romeo Santos, Sebastian Yatra y Manuel Turizo, Luis Fonsi, J. Balvin, Zion & Lennox, Lele Pons and others.Some of his achievements as solo artist include two Latin Grammy Awards in 2016 (Best Urban Fusion Performance), (Best Urban Song); a Latin American Music Award (Album of the Year) and numerous BMI Awards. In 2018, Yandel surprised his fans with the announcement of a tour with his long-time friend and music collaborator Wisin.  The duo kick- off their first of eight record-breaking concerts at the Coliseo de Puerto Rico and made history when they became the artists with the most sold out shows in that arena.   As a soloist, Yandel has scored 10 #1’s at Billboard’s Top Latin Airplay list, in March 2019 released his sixth solo álbum titled “THE ONE”, in 2018 recorded with Wisin their duo album Los Campeones del Pueblo / The Big Leagues and his most recent solo album is titled “QUIEN CONTRA MI 2” (summer 2020).  In May 2021, Yandel received 16 Platinum and 4 Gold certifications from RIAA.

ABOUT JEFF HAMILTON
Born in Morocco in 1956, Hamilton moved to Paris in 1967. As a young man, he studied math and physics before entering the fashion world. Shortly after relocating to the U.S. in 1980, he became a Guess Jeans licensee and launched the denim brand’s first line of menswear. By 1985, the annual sales of Hamilton’s division reportedly had reached $30 million. In the mid-’80s, the relationship between Hamilton and Guess ended and at that point, the designer already had been creating “crazy” jackets for himself. He eventually started making elaborate pieces for celebrities like Michael Jackson, Mike Tyson, and George Michael. On the advice of friends, he sought to increase business by acquiring licenses from the NFL and the NBA. His first NBA client was Reggie Theus. Then came Magic Johnson, who introduced him to Jordan. When a panel selected the 50 greatest players in NBA history during the 1996-97 season, the league commissioned Hamilton to make jackets for each honoree to wear at an All-Star game ceremony. And every year in June, Hamilton attended the NBA Finals, after which he’d slip back into the winning locker room to deliver jackets. In recent years, the cultural phenomenon of Hamilton’s jackets have made a strong comeback and can be seen on celebrities from sports to music and everything in between.