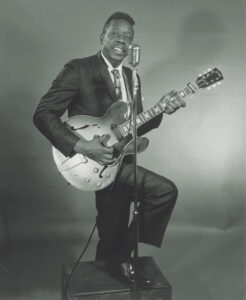 For 127 years, Gibson has shaped sound across generations and genres and has emerged as the most relevant, played, and loved guitar brand around the world. Gibson is proud to release the legendary American Bluesman’ s signature ES-330 electric guitar, the Lovell. The Slim Harpo “Lovell” ES-330 guitar is handmade by the expert luthiers and artisans of Gibson USA in Nashville, TN and is available worldwide at: www.gibson.com.
An homage to blues musician James «Slim Harpo» Moore, Gibson USA has recreated Harpo’s guitar of choice, the Gibson ES-330 in the form of the Slim Harpo «Lovell» ES-330 in Vintage Sunset Burst. The Slim Harpo «Lovell» ES-330 features a three-ply Maple/Poplar/Maple top, back and sides with Spruce bracing, a Mahogany neck with a rounded C profile, Rosewood fretboard with small block inlays, ABR-1 bridge with Trapeze tailpiece, Vintage Deluxe tuners with white buttons, Dogear P-90 pickups with hand-wired controls, and Orange Drop capacitors. The guitar has a custom “Lovell” logo on the back of the headstock to honor Slim Harpo’s wife, life partner, manager, and the co-writer of some of his biggest hits, Lovell Moore.
Watch and share the video below as Keb’ Mo’ talks about the enduring influence of Slim Harpo: HERE. 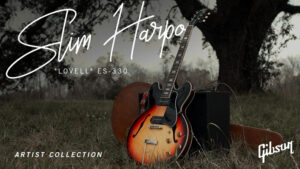 The story of Slim Harpo and his music is among the most fascinating in all of blues and R&B. With his fusion of blues, rock & roll rhythms, soul, swing and even country vocal inflections, Slim was a prominent torch bearer of a subgenre known as Louisiana swamp blues. His brush with chart topping pop fame was brief as was his life, but his imprint on music is undeniable. Today, 51 years since his passing, Slim is an unsung hero of the blues – that is, outside of the generations of iconic artists he influenced.
Born in 1924 among the sugar cane fields of Belmont Plantation across the Mississippi River from Baton Rouge, Louisiana, Slim Harpo, aka James Isaac Moore was among the last of the original down-home bluesmen, but also one of the first to register hits on the pop charts.
Slim made an impressive debut with his recordings of I’m a King Bee.” In 1957. Turning professional-against his wife and music manager, Lovell’s advice – Slim found it tough to survive. Lovell booked his gigs, co-wrote his songs (although she was mostly uncredited), and traveled with him to shows out of state.