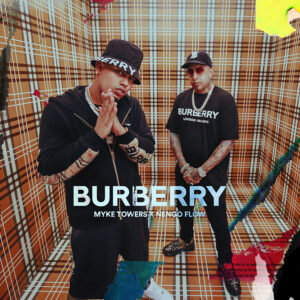 One of the genre’s leading Urban artists and songwriters, Myke Towers, releases his latest hit track “Burberry” alongside fellow Puerto Rican rapper Ñengo Flow as well as the official video for the song. “Burberry” will be featured on Towers’ upcoming highly anticipated album “Lyke Mike.” The song is available to stream on all digital platforms today.

Towers’ latest song sees him dive into the trap style of rap and showcases his intuitive and instinctive nature for producing music that is raw and gritty overlaid on sharp beats. “Burberry” lyrically demonstrates Towers’ power when it comes to weaving a narrative that not only resonates with his global fan base but also further pushes him into a league of his own. His lyrics are only highlighted by the hypnotic beats that are supported by violin, helping to set the tone for Towers’ complete vision. For this song, he calls upon compatriot Ñengo Flow to further deepen the sense of raw grit that Towers wanted for the song.

The video, directed by Charlie Nelson and production house Compostela, proves to be the perfect visual complement for the song as it lines up with the spirit and attitude laid by Towers and Ñengo Flow. Not only was the video looking to replicate the mood brought forth by the track, but it also pulled aesthetic inspiration from one of Towers’ favorite designers. In the video, both Towers and Ñengo Flow run through their verses as the camera symbolically follows them through all the hardships they experienced due to their never-ending hustle.

The release of “Burberry” follows in the footsteps of Towers’ most recent hit track “Cuenta,” which dives into the stark differences between the past, the present, and how to be unapologetic about everything that you’ve worked for. The video for the song, which was directed by Charlie Nelson, has already garnered over 14.8 million views on Youtube and over 4.7 million streams. Towers’ previous album Easy Money Baby was certified triple-platinum by the RIAA and debuted in the No.1 spot on Billboard’s «Top Latin Albums» and “Latin Rhythm Albums” chart. Several of the Puerto Rican performer’s hit songs also received certifications: “La Playa” (5x Platinum), “Diosa” (3x Platinum), “La Playa Remix” (1x Platinum), “Si Se Da” (10x Diamond), “Si Se Da Remix” (7x Platinum), and “Girl” (3x Platinum). Towers has had six singles charting on Spotify’s Global Top 200 list and reached the top spot in 12 countries on YouTube and six countries on Spotify. He also has 38 songs charting across various platforms around the world. He has also been ranked No. 8 on Spotify’s “Most Streamed Male Artists” thus far in 2021 with over 1 billion streams. Towers also worked on Selena Gomez’s debut Spanish EP for the song “Damelo To’” which has ranked No. 4 on Spotify’s “Top Debut Songs” for March 12-14. Earlier this year, Towers and his independent label Whiteworld Music signed their first global distribution pact with Warner Records and Warner Latina.