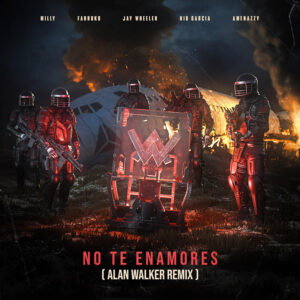 Innovative and indelible singer, songwriter, and performer, Milly, releases his latest single “No Te Enamores (Alan Walker Remix)” on Carbon Fiber Music. This new version of the song sees the Puerto Rican artist team up with some of today’s most recognizable performers Farruko, Jay Wheeler, Nio Garcia, and Amenazzy as well as  multi-platinum streaming Norwegian DJ Alan Walker. The song is available to stream today on all digital platforms.

The remix sees Milly up the anty and brings a new level of heat as he brings on some of the Latin genre’s most recognizable voices. Farruko, Jay Wheeler, Nio Garcia, and Amenazzy respective verses prove to be the perfect complement to Milly’s silky baritone cadence and memorable lyrical prowess. The song follows in the footsteps of the original and finds the performers singing to their respective leading ladies how they should not fall in love with them as they are not a suitable match for them due to the path they are on in their lives. This new version of the song is sure to become another hit hand in hand with Alan Walker, who to date holds over 120 million followers and 50 billion audio and video streams to his name,  previously teaming up with massive hitmakers such as Ava Max, Noah Cyrus and A$AP Rocky, while producing remixes for internationally renowned artists as Sia, Coldplay, Kygo, Bruno Mars and Julia Michaels.

In the music video, produced by MER content, we see impactful and impressive cinematographic scenes with a movie-like opening scene in which a group of armed men are guarding an object placed in the middle of a cargo plane and suddenly an explosion goes off in the rear of the plane, ejecting the guarda from the aircraft. Following the same theme, the video continues with action-packed scenes under an unrivaled movie-style production.

In the summer of 2020, Milly released the original track “No Te Enamores» to much success. The video for the track went on to garner over 1.6 million views on Youtube and 1.16+ million combined streams. Milly also found further success with the releases of hit singles “Ella Baila” ft. Menor Menor, “Maldita» ft. Josephlee and Ankhal. In 2019, the singer-songwriter released hits like “Lucifer,” “Así» ft. Lary Over, Tayl G and Menor Menor, “Hoy,” and “Es Normal” ft. Dalex, Lary Over, Sharo Towers and Menor Menor. “Es Normal» went on to surpass 4 million streams on Spotify and 20 million views on Youtube.