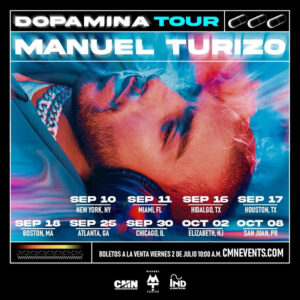 After the big global success of his most recent album “Dopamina”, the urban music idol Manuel Turizo announces a new concert tour in the United States “DOPAMINA TOUR”.
Manuel Turizo fans waited a long time to see their idol again, but now, «DOPAMINA TOUR» starts officially on September 10th in the emblematic city of New York, then passing through different cities such as Houston, Miami, Atlanta, Chicago, among others and finishes on October 8th in San Juan, Puerto Rico.
The tour owes its name to the singer’s latest studio album «DOPAMINA»; a 13-track album that features collaborations with A-list artists such as Wisin y Yandel, Farruko, Rauw Alejandro, Myke Towers, J Quiles, Dalex, El Alfa, Will I AM and Maluma.
“I really miss being on stage, interacting with my audience, feeling and singing my songs at the top of my lungs. That is why I am extremely excited and blessed to be reunited with my fans”.
Hand in hand with CMN Events, Manuel Turizo will meet again with his fans very soon. The official pre-sale begins on June 30th, using the DOPAMINA code, and the sale to the general public opens on July 2nd at 10:00 AM (ET) local time, through the web portal: www.cmnevents.com and manuelturizo.com