LARY OVER JOINS FORCES WITH FARRUKO, EL ALFA AND LÍRICO 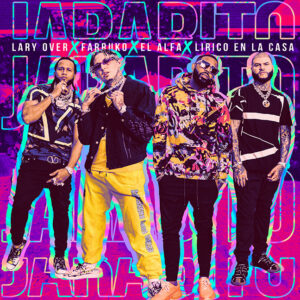 One of the most versatile artists and musicians of the Latin Trap genre, Lary Over, releases his latest single “Jarabito.” The track, which is being released under Carbon Fiber Music, sees Lary Over team up with some of the most accomplished and well-recognized performers in the music industry, Farruko, El Alfa, and Lírico En La Casa. «Jarabito» is available on all digital platforms as of today.

With this song, Lary Over continues to demonstrate his true innate and creative potential to create music that resonates with audiences on the global stage. «Jarabito», which was produced by Gaston, has an infectious rhythm with the unmistakable flavor of the Dominican dembow that blends seamlessly with the emblematic and unique voices of each of the performers, making it the perfect melody for the summer.

In 2020, Lary Over managed to maintain his status as one of the stars of the Latin Trap during one of the most challenging times for the music industry by creating and releasing songs that connected with people globally. The artist recently collaborated with globally-recognized artists such as Rauw Alejandro and Lil Geniuz on “Anda Deja”, with Jay Wheeler on “Matemos Las Penas” and with Rafa Pabön on the song “Me Acostumbré” — songs that all accumulated millions of streams across various digital platforms consolidating him as one of the Trap genres most potent musical forces.