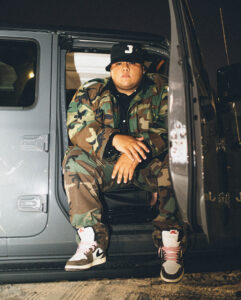 Puerto Rican artist and musician, JODOSKY, releases his latest single and music video for “CAMBUMBEO.” The song demonstrates the unique flow and sound that JODOSKY’s has developed since being signed on to NEON16. The song and video are available to stream on all digital platforms.

With “Cambumbeo,” JODOSKY points to a way of life and philosophy that he has believed in all his life — that of being up for anything. “Cambumbeo,” according to the artist, refers to the determination that overtakes someone and allows them to push through anything. JODOSKY explains, “it’s a determination that stems from within us that’ll get us through anything. Basically, if you are out with your people, you are ready for anything. They have gone out to ‘Cambumbear’!»

From beginning to end, the Puerto Rican enjoyed the complete process of creating the song alongside Albert Hype as well as that of filming the video with his team. He cites, «Being so close to both creative processes gives this project a very special feel and enhances the song for me.»

The release of “Cambumbeo” follows the debut of his track “No Le Bajamos,” which was his first song released with the leading multimedia incubator NEON16. It also marked the singer-songwriter’s first collaboration alongside legendary Puerto Rican producer and artist Tainy. “No le Bajamos,” which features Latin Urbano artist Juanka, established JODOSKY’s official entry to the music industry.

At the beginning of the song, fans hear JODOSKY discussing the supposed death of the Reggaetón genre. As a true fan of the genre, he disputes and refutes this claim and uses this song as his proclamation that Reggaetón is something that is eternal. He explains, “Reggaetón has not died, nor is it going to die! Reggaetón is a genre that was born from the streets and its people. It was one of the most criticized genres with people saying that it was not going anywhere. Look at it now,» .

In a convincing way, the artist concluded by saying, “the reality is that the same people who criticized it and continue to do so have to accept that Reggaeton has positioned itself as the basis of music in the world. Now, since they don’t want to accept that the genre that came from the streets was not going anywhere and has already gone worldwide, they decide to change its name. That’s it!”.