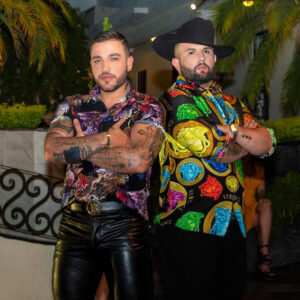 Two of the most successful artists in Mexico, the United States and Colombia: Jessi Uribe and Carin León, join forces for the release of «RESULTÓ MUY PERRA» (Me dejó solito).
After the great international success achieved by the Colombian artist Jessi Uribe with the single “El alumno” together with Joss Favela, reaching the #6 position in billboard charts, the popular music interpreter continues to expand towards new territories, thus developing a new musical alliance with the renowned Mexican artist Carin León, who was also positioned on the Billboard Regional Mexican chart in the Top # 1 with his hit “Tú”.
«RESULTÓ MUY PERRA» (Me dejó solito) was born in Mexico, with lyrics and music by: Javier Gonzalez “El Tamarindo” and Carin León and produced by Alberto Medina. The song premieres with its official music video, which was recorded in Hermosillo, Mexico (city where Carin León resides) highlighting the striking natural landscapes of the place.
It is a song that refers to a story of an ugly heartbreak, with which it is hoped that there may be a connection with the audience, thus making it another “viral” song for both artists.
With this song, Jessi Uribe hopes to continue venturing into the regional Mexican genre and, of course, bring more of this music style to his native Colombia, thus expanding its audience and connecting with the audiences of two of the most viral and influential exponents of Colombia and Mexico. Carin León has over 85 million listeners, being one of the most important Mexican music interpreters in Mexico.
Jessi Uribe and Carin León will be performing this song live for the first time on June 28th at the HTV Heat Awards in Punta Cana.
Listen today to “Resultó Muy Perra” (Me dejó solito) on your favorite digital platform.