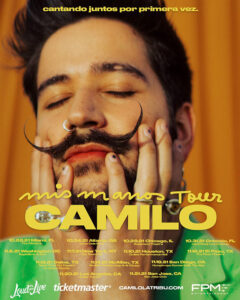 After dominating the sales, streaming, and radio charts with multiple hits since his solo debut in 2019, Colombian singer-songwriter, musician, and producer Camilo will bring his long-awaited «Mis Manos Tour» to 13 cities in the United States starting in October 2021.
Before arriving stateside, the «Mis Manos Tour» will kick off this July in Spain, with tickets selling out in less than six hours since going on sale last Friday. An unprecedented fact being that this is Camilo’s first tour, which represents something extraordinary for him and his legion of fans, La Tribu, who have waited patiently for two years to see him live.
«The first ingredient of what makes this tour so special is the expectation that I have of going out for the first time to meet face to face with the people who have found happiness in my music, especially during the complex moments that this pandemic has brought to the world. Looking at each other in the eyes for the first time and singing together those songs that have become hymns of hope and light for both La Tribu and myself is something I have dreamed about for a long time. I’m so happy and grateful that it will finally become a reality,» said Camilo.
The Latin GRAMMY winner® and GRAMMY® nominee, will perform with his band, all the hits from his two platinum-certified albums Por Primera Vezand Mis Manosincluding «Tutu,» «Por Primera Vez,» «Favorito,» «Vida de Rico,» «Ropa Cara,» «BEBÉ,» «Millones,» and many others.
Presented by entertainment, marketing, and media company Loud And Live, the anticipated tour will be featured in major cities across the country, including Miami, New York, Dallas, Houston, and Los Angeles.
«It is an honor for us to be able to collaborate with one of the most recognized and talented Latin artists of the moment and we are grateful for the trust he has placed in us as he embarks on his very first tour,»said Nelson Albareda, CEO of Loud And Live. «We are excited to be able to bring this experience to the entire ‘Tribu’ for the first time and look forward to putting unparalleled passion and dedication into making this a memorable experience for all his fans,» Albareda added.
« CAMILO LLEVARÁ SU ESPERADO “MIS MANOS TOUR” A ESTADOS UNIDOS
ANITTA LA SUPERESTRELLA GLOBAL DEL POP LANZA “GIRL FROM RIO” REMIX JUNTO A DABABY »