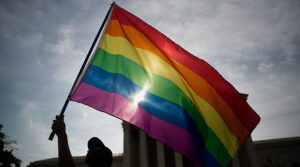 Today, the Human Rights Campaign (HRC) Foundation, the educational arm of the nation’s largest lesbian, gay, bisexual, transgender and queer (LGBTQ) civil rights organization, joined by the law firm of Arnold & Porter, filed a across the country of anti-equality laws in Arkansas, Mississippi and Tennessee.

“Given the unprecedented onslaught of state legislative attacks, we have a responsibility to utilize every tool in our belt to safeguard the LGBTQ community, including suing the states that infringe upon our civil rights,” said Alphonso David, Human Rights Campaign President. “On the first day of Pride Month, a moment of celebration, Governor DeSantis signed a bill into law attacking transgender children—now, on the last day of Pride, we are sending a message to him, and all anti-equality officials, that you cannot target our community without retribution. Kids just want to play sports, and are confused about why their state’s leaders, who are elected to represent them, are so determined to hurt them. There is no way to be more clear: transgender children are children; transgender girls are girls; transgender boys are boys; and our community deserves respect, dignity and equal protection under the law.”

The case in Florida is brought on behalf of 13-year-old Daisy* and her parents Jessica and Gary N. Daisy is starting 8th grade in the fall and has participated in team sports since she was 8 years old. She finds joy, friendship and acceptance in basketball, softball, and currently, as a goalie on three different soccer teams. The Florida law will force Daisy to either play on the boys’ soccer team at school, which she will not do, or quit sports altogether which would be detrimental to her academic and social development, while also potentially risking her personal privacy and safety.

“Playing sports makes me feel like I fit in, the thought of not being able to play next year scares me,” said Daisy. “I’m going to be lonely and sad if I can’t play.”

Daisy has only participated on girls’ sports teams; while some of her teammates and coaches are aware of her transgender identity, others are not. She has enjoyed a supportive school and team environment and continues to play without incident with other teammates, opposing players and coaches, or parents of other student athletes. With her parents’ support, Daisy began receiving gender-affirming medical care in middle school.

Jessica and Gary have whole-heartedly supported their daughter throughout her transition. Jessica and Gary take pride in encouraging Daisy’s participation on sports teams by shuttling her between nightly practices and scrimmages, paying registration and equipment fees, and coordinating work schedules to make sure they are present to watch Daisy in games and tournaments. When Daisy began to express a desire to wear clothing to reflect her authentic gender, Jessica became Parent Teacher Association (PTA) President of Daisy’s elementary school to ensure her child’s safety. Jessica remains a vigilant parent, recently changing careers to work as an aide in the high school Daisy will attend next year.

“It is a very helpless feeling to know that people think our daughter does not deserve the rights to play sports with her friends—she has been playing with them for the last seven years and it has not been an issue,” said Jessica and Gary. “Taking this right away will only further isolate her from her peers and take away her ‘safe space.’ She is just a girl that wants to play sports with her friends and be part of a team. As her parents, we just want her to be happy.”

HRC’s lawsuit asserts a number of legal arguments including that the law is in clear violation of Title IX of the Education Amendments of 1972; Title IX expressly prohibits discrimination on the basis of sex, in any education program or activity offered by a recipient of federal financial assistance. The Department of Justice also recently announced that Title IX of the Education Amendments of 1972 prohibits discrimination on the basis of gender identity and sexual orientation in federally-funded education institutions. The lawsuit also asserts that the law violates the Equal Protection Clause and Due Process Clause of the 14th Amendment to the U.S. Constitution. More information regarding the upcoming legal challenges in Arkansas, Mississippi, and Tennessee will be announced throughout the year.

“Arnold & Porter is proud to stand with the Human Rights Campaign to defend transgender children who want to participate in sports consistent with their authentic identities,” said Rosalyn Richter, senior counsel at Arnold & Porter. “Our constitutional challenge in support of transgender youth exercising their rights reflects our firm’s longstanding commitment to equality and inclusivity for members of the LGBTQ community.” The Arnold & Porter pro-bono team was led by Richter and also included partners Kent Yalowitz and Jason Ross.

As the rash of transgender sports ban laws in states across the country have increased, lawmakers who supported the bills have failed to provide examples of any issue in their states to attempt to justify these attacks on transgender youth, laying bare the reality that they are fueled by discriminatory intent and not supported by fact. The nation’s leading child health and welfare groups representing more than 7 million youth-serving professionals and more than 1,000 child welfare organizations released an open letter calling for lawmakers in states across the country to oppose legislation that target LGBTQ people, and transgender children in particular.

An April 2021 poll by PBS, NPR and Marist states that 67 percent of Americans, including 66 percent of Republicans, oppose the anti-transgender sports ban legislation proliferating across 30 states. Another poll conducted by HRC and Hart Research Group in March 2021 revealed that, with respect to transgender youth participation in sports, the public’s strong inclination is on the side of fairness and equality for transgender student athletes—73 percent of voters agree that “sports are important in young people’s lives and young transgender people should be allowed opportunities to participate in a way that is safe and comfortable for them.” Additionally, 138 companies around the U.S. have signed the Business Statement Opposing Anti-LGBTQ State Legislation stating their clear opposition to harmful legislation and laws aimed at restricting the access of LGBTQ people in society.

“We cannot sit idly by as Republican legislatures make transgender youth the newest target of a campaign of hate and ignorance,” said Jon Harris Maurer, Equality Florida Public Policy Director. “Equality Florida stands with our partners challenging the cruel and unnecessary Transgender Youth Sports Ban in Florida and elsewhere. Transgender youth are some of the most at-risk in our community, and we will never stop fighting for them.”

“It is important to recognize this is hate disguised as legislation,” said Tatiana Williams, TransInclusive Executive Director. “It sets a tone and sends a message to the larger community that discrimination against the transgender community is okay—this is deeper than sports. We have to lead by example and understand the mental health impact this has on our already-at-risk community”

For many years, the HRC Foundation has partnered with legal and civil rights groups to advocate for civil rights in the courts. Now, through its Impact Litigation Initiative, HRC Foundation has expanded its legal footprint to include strategic impact litigation in domestic and international courts. Working with the world’s top law firms, the HRC Foundation is pursuing strategic cases and using the courts to hold accountable entities and governments who target the LGBTQ community with discriminatory laws and policies.

The Human Rights Campaign Foundation is the educational arm of the Human Rights Campaign (HRC), America’s largest civil rights organization working to achieve equality for lesbian, gay, bisexual, transgender and queer (LGBTQ) people. Through its programs, the HRC Foundation seeks to make transformational change in the everyday lives of LGBTQ people, shedding light on inequity and deepening the public’s understanding of LGBTQ issues, with a clear focus on advancing transgender and racial justice. Its work has transformed the landscape for more than 15 million workers, 11 million students, 600,000 clients in the adoption and foster care system and so much more. The HRC Foundation provides direct consultation and technical assistance to institutions and communities, driving the advancement of inclusive policies and practices; it builds the capacity of future leaders and allies through fellowship and training programs; and, with the firm belief that we are stronger working together, it forges partnerships with advocates in the U.S. and around the globe to increase our impact and shape the future of our work.