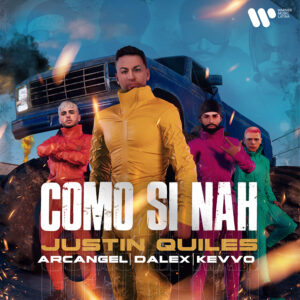 For “Como Si Nah,” Quiles teamed up with Dimelo Flow to create a song that was as dynamic and unique as Quiles’ previous songs. In it, fans can hear Quiles’ signature playful lyrics spoken to life with his one-of-a-kind flow. To add another layer to the song, he called upon fellow Urbano Latino performers Arcangel, Kevvo, and Dalex all of which bring their individual fire and flair and are layered as the perfect and ideal complements to Quiles tone and vision for the song. The song, which is a bridge single, will serve as a standalone song that is going to be released separately from his upcoming third studio album.

The video for the “Como Si Nah” features all four of the song’s protagonists in a high-stakes, high-speed animated chase in the style of the popular video game Grand Theft Auto. It starts off with Quiles, Arcangel, Kevvo, and Dalex hopping into a getaway car as they speed off from a fiery gas station explosion and run into the awaiting barricade of police officers looking to slow them down and apprehend them. As the story develops each of the artists has their moment to shine lyrically and within the story, as they push the escape plans further along — ultimately ending in a successful getaway.

Justin’s nominated tracks “DJ No Pare Remix” alongside Natti Natasha, Farruko, Zion, Dalex, and Lenny Tavarez, which accrued over 600 million combined streams, and “Porfa Remix” with Feid, J Balvin, Maluma, Nicky Jam, and Sech have collectively amassed over 508.7 million views on YouTube. Following in the footsteps of his global hit “Jeans”, which was certified Platinum in the US, the singer-songwriter ended 2020 with a bang after he released his hit song “Ponte Pa Mi” which accrued over 42.6 million views on Youtube, charted in the Top 200 Global list on Spotify with more than 95.2 million combined streams, and is certified Platinum in the US.