Jeremiah says, «(Kinds of Light) is about opposing selves, the way relationships with other people compel us to reckon with our own identity, the way our stories gradually become histories, and the things we choose – or don’t choose – to carry with us. The underlying thread, like all 5 songs on the EP, is connection between people – the ways that we try to understand each other, and the ways we change each others’ orbits.» 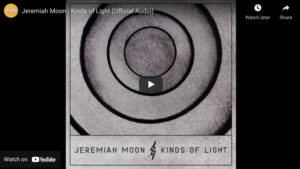 The tracks that make up the ‘Sputnik’ EP were recorded with friend and producer Adam Black in a remote cabin in Florence, OR. He says, «We laid down the main tracks during this time and pieced together the rest of the EP and arrangements over the next couple of years.»

Moon’s music bears the mark of the musicians that inspired it, channeling the energy of a diverse list of influences that range from Peter Gabriel, Kate Bush, Thom Yorke, Blake Mills, Sufjan Stevens, Claude Debussy, and Nick Cave, to Mahler, Dvorak, Stravinsky, Ravel, and the poetry of Christian Wiman, all while simultaneously carving its own path.

After graduating, Moon studied cello performance at Boston University. He recalls, «I started writing my first songs when I was home on summer vacations.»

In 2013, Jeremiah moved to Seattle and started accompanying guitarists for live shows and recording sessions, as well as working on his illustration skills and building a portfolio of his work. He says, «I started seriously working on songwriting in 2018 after being challenged by a friend to take myself more seriously as an artist. The 5 songs on my EP were a direct result of the momentum from this burst of inspiration.»