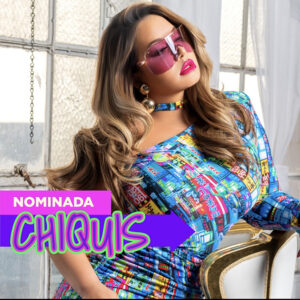 Voting is now open and fans have until June 28th to vote for their favorite artists at: www.premiosjuventud.com/vota and on the Uforia app. The 18th annual Premios Juventud will take place on July 22nd and will be transmitted live from Miami on the Univision Network.

Chiquis recently made history becoming the first female Latin singer to release NFTs; and the response was monumental, shooting to the top of the Rarible chart on her debut week.

Two weeks ago, Chiquis returned to the stage following the pandemic, with two successful live concerts where she performed songs from her award-wining album PLAYLIST as well as all of her hits.  They took place at Weidner Field Stadium in Colorado Springs and at the Speaking Rock Entertainment Center in El Paso, Texas.

Chiquis also recently took part in CalHope.org (a social program in California) Concerts in order to spread a positive message for mental health based on what was experienced during this pandemic lockdown. She appeared on both «Latin Night», as well as “Women’s Night”, where Chiquis, alongside other renowned female artists like Sofía Carson, Ava Max and Grace Potter, performed in a special concert.

On the same week she joined the Latin Grammy in the Schools virtual program for Thomas Jefferson High School in Dallas, TX, featuring a conversation and a special performance in support of the academic development of the high school students. The school received a donation of $20,000 in musical instruments thanks to the Latin Grammy Cultural Foundation and the Ford Motor Company Fund. This event can be seem on the official Latin GRAMMYs® YouTube channel.

About Chiquis
Janney Marín, better known as Chiquis, is an artist (singer and songwriter), businesswoman, author and television celebrity and Latin GRAMMY award winner for Best Banda Album (for PLAYLIST).

In 2017, Chiquis released her successful single «Vas a Volver». The song was produced by ten-time Latin Grammy winner and producer Edgar Barrera, who also produced her previous hit “Horas Extras». Both songs received radio airplay across the United States and Mexico. «Vas a Volver» is part of her second album titled Entre Botellas.