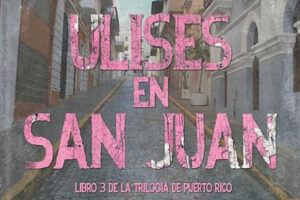 The Puerto Rico Trilogy, now available in Spanish as well as English, deals with crime, corruption and “the colonialism that spurs the darker side of life on the island,” according to Robert Friedman, the author 0f the novels, and former San Juan Star journalist.

Friedman, who lived more than two decades on the island while working for the English-language daily, which folded in 2008, said he hoped the three novels offer readers “a captivating view into the lives of individuals caught up in /the island’s crime and politics.

“I have tried to explore with suspense, compassion and dark humor what it has been like for the island’s residents to live, love, work and plot,” said Friedman. “The novels are set between the 1980s and 2005,” he said, adding: “I don’t believe that the nitty-gritty of life on the island has change much since.”

The first book in the Trilogy, The Odyssey of Pablo Camino (La odisea de Pablo Camino} was inspired by a real-life incident when Dr. Cornelius P. Rhoads, sent to the island in the 1930s to treat an outbreak of pernicious anemia, claimed in a letter, which was discovered and made public, that he purposely killed eight of his patients because of his disgust with the “natives.” He later said the letter was just a “joke.” In the novel, Pablo Camino, the doctor’s fictional son, is a well-known, but troubled Puerto Rican artist who goes on a search for the truth of his late father’s possibly murderous past.

The Defining Sea (El mar que nos define), book two, is derived from the U.S, Navy’s decades-long live-fire, bombing and chemical weapons-testing on Vieques–inhabited by some 20,000 U.S. citizen-Puerto Ricans–that caused everyday hardship, sickness and death. After his girlfriend is killed by police during a protest against the Navy’s maneuvers, Richie Perez, a 20-year-old University of Puerto Rico student, starts delivering drugs between the island and the states to raise money for a scholarship in her name. He is soon at odds with the drug dealers, who hunt for him from the Bronx to Bayamon and up into the Cordillera Central. Along the way Richie comes of age as he learns hard truths about life, love and loss. 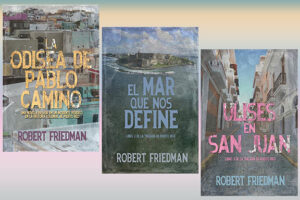 Ulysses in San Juan (Ulises en San Juan), book three, relates, among other things, the growing bond between Wolf, a Polish-Jewish concentration camp survivor, who has come to Puerto Rico to try to build his life again, and Carmen, a drug addict. The novel takes the reader on a trip into the San Juan underworld, as well to other island sites. The novel’s main theme of survival also includes the stories of Stevie Diaz, a young Newyorican who has recently returned to the island to find where he is truly at, and of Doris Jackson, a wannabe jazz singer who has escaped to the island from an abusive husband

The novels are currently in paperback and e-book versions on Amazon, Barnes & Noble, and other online book sites. The Spanish translations are by Maria Emilia Ruiz.

About Robert Friedman:
Robert Friedman was born and raised in the Bronx, N.Y, and spent more than 20 years living in Puerto Rico and working for the English-language San Juan Star. as well as a special correspondent for the New York Daily News. He was Washington correspondent for the Puerto Rico newspaper and has had six novels published. Friedman lives outside the nation’s capital, in Silver Spring, MD.