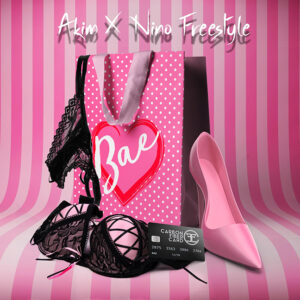 Panamanian singer-songwriter, Akim, releases his latest hit track “BAE” following in the footsteps of his previous hit “Otra Baby.” Akim joins forces with Dominican rapper and artist Nino Freestyle to help bring the single to life. The song and official video are available to stream on all digital platforms today.

Despite the song’s hip-hop and Latin trap influences, “BAE” showcases a much more romantic side of both AKIM and Nino Freestyle. The song intricately details the immense love that a man has for his leading lady and all the things that she inspires him to do and feel. AKIM’s silky cadence and flow expertly weaves the story of what he has planned for his leading lady once he arrives at her home ready to take her out. Nino Freestyle’s force and lyrical style help take “BAE” to new heights and ensure that AKIM’s vision for the song is realized. The video was produced by Cristian Aguilar and filmed in the neighborhood where Nino Freestyle grew up in Santo Domingo, Dominican Republic.

AKIM explains, “The inspiration for the song came from one afternoon when I was out and noticed how the men were spoiling their ‘bae’ (or ‘baby’). I wanted to write a song that reflected the sentiment of wanting to celebrate your partner. Men want to celebrate their women, and I wanted to create something that would memorialize that feeling.”