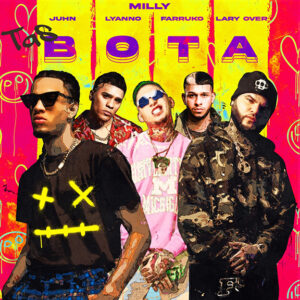 Puerto Rican singer-songwriter Milly, teams up with fellow performers and artists Juhn, Lyanno, Lary Over as well as iconic urbano superstar Farruko for the release of his latest hit song “Tas Bota” along with its official video. The song and video are available to stream on all digital streaming platforms today on Carbon Fiber Music.

“Tas Bota” further demonstrates Milly’s ability to create music that is memorable and can resonate with global audiences. To bring his latest song to life, Milly enlisted the help of fellow Puerto Rican Urbano singer-songwriters Juhn, Lyanno, Lary Over, and Farruko. “Tas Bota” weaves a story of how someone moves on after experiencing heartbreak within a romantic relationship. Milly’s smooth and polished tone perfectly pairs with the more somber beats that are heard throughout the song. The Puerto Rican singer finds the ideal counterparts in the iconic performers Farruko, Juhn, Lyanno, and Lary Over as each of their verses and flows add something that is truly unique to the song.

The video, which was filmed in Miami, FL, was directed by Jose «Guri» Bellaflores Diaz and produced Teimaginas. The colors and hues showcased in the scenes match the feel of the song and boost the amount of melancholy and solemness brought forth by the song. Each performer can be seen delivering their verses surrounded by scenery of a broken home reminiscent of the pain that each feels due to the betrayal they feel was imparted on them by their former leading ladies.

In April, Milly released “No Te Enamores (Alan Walker Remix)” alongside Farruko, Jay Wheeler, Nio Garcia, Amenazzy, and multi-platinum streaming Norwegian DJ Alan Walker. With this song, Milly brought an unprecedented level of musicality to the remix with silky baritone and indelible lyrics. In 2020, he released the original track “No Te Enamores» to much fanfare and shortly after, recruited industry greats Farruko, Nio Garcia, Jay Wheeler and Amenazzy for “No Te Enamores Remix”, which has accrued over 138 million views on YouTube and amassed over 140 million combined streams. The performer and artist has also experienced additional success with his other tracks “Ella Baila” ft. Menor Menor, “Maldita» ft. Josephlee and Ankhal, “Lucifer,” “Así» ft. Lary Over, Tayl G and Menor Menor, “Hoy,” and “Es Normal” ft. Dalex, Lary Over, Sharo Towers and Menor Menor. Milly will continue to release new music in 2021 on Carbon Fiber Music.