ALONGSIDE  MILLY AND LARY OVER.

Breakout Panamanian Urbano artist, Akim, releases new track “Bella Bella” with fellow Carbon Fiber Music counterparts Milly and Lary Over. The song, along with the official video, follows in the footsteps of his previous track “BAE” alongside Dominican rapper and artist Nino Freestyle. “Bella Bella” and the video are both available to stream on all digital platforms today.

Where “BAE” took more of a Hip-Hop/Latin Trap-inspired route, “Bella Bella” takes a more hypnotic approach with its lyrics, tonalities, and beats. The track sees Akim join forces with Puerto Rican artists Milly and Lary Over to pay homage to the beauty that their leading lady possesses and how they are transfixed by it. Using his indelible flow and musicality, Akim paints a picture of an intimate moment shared with his leading lady and how it has become something he would never give up. Milly and Lary Over prove to be the perfect complements to help bring life to the track and help elevate it through their lyrical prose and flow.

The video was filmed in the Dominican Republic, and was directed by Cristian Aguilar and produced by Rike Music. To match the tone and vibe that Akim was looking to achieve with the song, Aguilar showed all three artists living it up at a private house party along with several dancers further adding to the sensuality that is brought forth in the song. 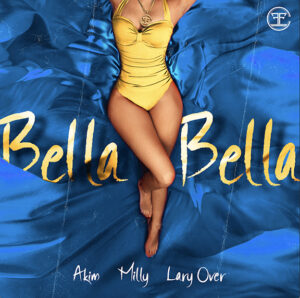