The Latin genre’s latest urban artist BOZA presents his new hit single “Ella.” The song is the first of three tracks that will be released leading up to his upcoming and much anticipated album dropping at the end of October. «Ella» is available for streaming on all digital platforms, today.

“Ella” is the focus track in BOZA’s upcoming musical trifecta of tracks. The artist and musician weaves a story about his attraction to a woman who carries herself with strength and integrity but due to the her manner of being is judged by those around her due to their own misconceptions of who she is and the life she leads. Written and composed by BOZA, Irving Quintero “Faster” and Alberto Gaitán, the songs that make up the “Ella” bundle tracks were recorded at Faster Studios. All the songs were mixed and mastered by Lewis Pickett (Paloma Mami, C. Tangana, Maffio) and were worked on in both Panama and Miami — cities where BOZA has been traveling to as he brought his work to life.

The music video for “Ella” was filmed in Miami under the direction of Daniel Bethencourt, who had previously worked with BOZA on the videos for «Party En Mi Casa,» «Odiarte,» «Bandida,» and «En 4 Vente.” In addition to “Ella,” BOZA will also be releasing “No Se Qué” and “Por Ti” in the coming weeks that will demonstrate his immense versatility in lyrical style and flow. 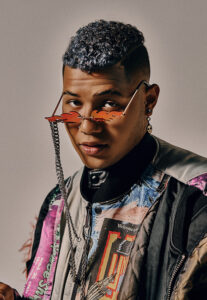 “Ella” precedes BOZA’s international hit “Hecha Pa´Mi,” which received multiple certifications. The song achieved Diamond status in Peru, Gold and Double Platinum in Mexico, Central America and the Caribbean, Double Platinum in Spain, Platinum in the United States, Gold and Platinum in Chile and Argentina, and Gold in Colombia, Italy, Ecuador, and Portugal.

ABOUT BOZA:
BOZA, whose given name is Humberto Ceballos, proves that he is one of music’s most versatile artists through his unique voice and lyrical prose. He fuses Dancehall with the Panamanian genre known as canela, a musical combination that has garnered him Gold, Multi-platinum, and Diamond certifications. In addition to his many certifications, his music has achieved prominent chart positions on some of today’s biggest streaming platforms in more than 40 countries.