In the new Planet Classroom podcast, youth describe how technology, ingenuity, individual commitment, and action will address the climate emergency. 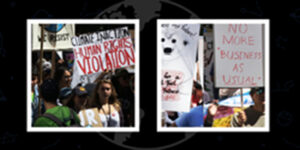 Eric Simon, Director of the documentary, What to Do About Climate Disruption, now showing on the Planet Classroom Network YouTube Channel, kicks off the new Planet Classroom podcast with a call to action for everyone to play their role in attacking the climate emergency, empowered by their areas of expertise and passion.

Eloise, a student living in Paris, believes “we must all act on a daily basis through simple actions that may seem trivial but which are essential.” Ashlyn from the United States says young people interested in STEM should “pursue a career that’s dedicated to developing green technology.” Anant from India wants young people to form a deeper connection with their natural environment. “As long as our generation can bring this connection with nature, our world will be in safe hands.”

Climate change is causing increasingly disastrous effects throughout the world and threatens to undermine the future existence of every living species. How is the evolution of technology contributing to the Climate Crisis? Bao from Vietnam says that thanks to tech, “alternative solutions for fossil fuel such as electric cars, solar panels, wind energy, nuclear energy, to name a few,” are now available to solve the problem. Alex in the United States believes that ”inventing our way out of climate change is possible.” However, “it’s a question of whether people are willing to change and if people are willing to put in the effort to really make those changes a reality.”