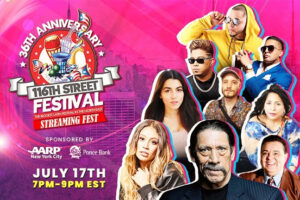 the “History of Salsa in New York” plus other creative surprises. This year’s festival will help raise awareness for the major COVID-19 Vaccination initiative, “De TiDepende” that was created by The Ad Council.

The virtual festival’s talent roster represents a cross-section of music genres and nationalities..

Even though this year’s festival is purely on broadcast TV and live stream due to COVID, the event is laying the groundwork for what organizers hope can be a return to the in-person and live stream spectacle in 2022 on the streets of New York City.

Brilla Media and Atlantino have produced several of the pandemic’s most prominent virtual festivals, including the recent Cinco de Mayo LA Virtual Festival (see the 1-min. recap video here) and Altísimo Live, which was a PRWeek 2021 finalist for the Best Multicultural Marketing Campaign of the Year.

The 116th Street Virtual Festival is being produced in partnership between Nick Lugo and Peter Spinella of Hispanic market and Advertisng Group, Manny Ruiz of Brilla Media and Atlantino. Additional media and production partners of the festival include Jerry Vargas and Kalvin Stevens; Futura Enterprises; Latin Heat Media; Latinx Newswire; Dustelli Music; Eddie Lopez; Heather Lopez and Rachel Matos. Community partners include the New York City Hispanic Chamber of Commerce; and the Friends of the National Museum of the American Latino.

Award-winning broadcaster and producers Richy Miranda-Cortese, Ralph Paniagua, and Manny Ruiz will direct the broadcast with Efrain Gonzalez as the Master Editor.

About Hispanic Marketing and Advertising, Inc.

About Atlantino LLC
Over the past 35 years, Ralph and Joseph Paniagua have built Atlantino into a powerhouse sponsorship and activations platform for Latino sports, entertainment, experiential, and digital. Through Atlantino and the company’s Latino Baseball and Latino Boxing media properties, Ralph has spearheaded Fortune 100 brand activations with more than 18 Major League Baseball teams, the Roberto Clemente Foundation, and more recently Golden Boy.

In 2020, with the Covid-19 pandemic canceling many major Latino events, Ralph pivoted to co-produce the 116 Street Festival and Calle Ocho Festival and the Dominican Days at the Ballpark at 18 MLB stadiums and RSNs as major virtual events reaching millions of viewers. And in 2021 Atlantino will produce several Virtual programs promoting the Baseball Icon Roberto Clemente.